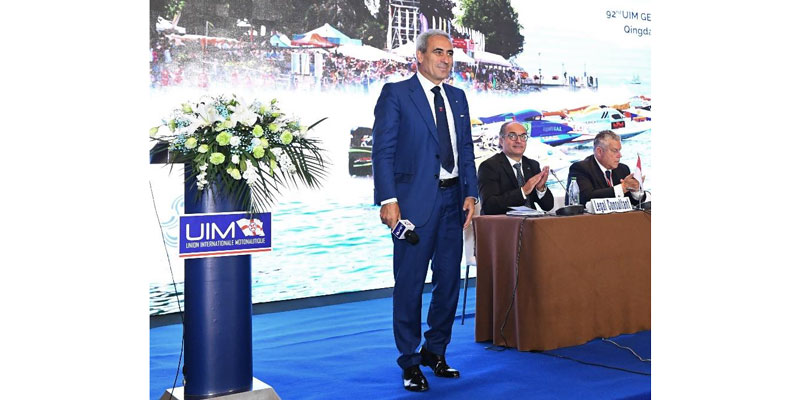 In its first edition ever held in China, this year’s UIM Annual General Assembly assembled more than 140 delegates from all over the world in the coastal Metropole Qingdao, well known by the international sport community for having staged the Sailing competitions of the 2008 Beijing Olympic Games. The UIM’s institutional summit brilliantly hosted by the China Water Sports Authority saw President Dr. Raffaele Chiulli reelected with overwhelming majority for another four years’ term at the helm of the International Powerboat Federation. Expressing his satisfaction over this landslide result, Raffaele Chiulli said: “This re-election rewards the strong willingness I have always expressed over these years, to renew and to rejuvenate the Powerboat Sport. Today we have many disciplines that are practiced with a lot of success all over the world, we have more and more young people participating in our races and sharing in the activities of the UIM. We have given a strong impulse to the use of renewable energies within our competitions, and we can confirm that environmental considerations and the respect of the sea are high ranked priorities within the UIM. Also, when speaking about safety, we can proudly say that we have reached a high level of efficiency and professionality.”

“Sustainability”, “Innovation” and “Growing the Sport” were central topics in the meetings and discussions held in the build-up to the General Assembly and the outcome clearly revealed that the introduction of new sustainable energy resources and making clever use of modern technology were instrumental for attracting new generations to join the sport. A perfect example of this trend is the addition of MotoSurf as new discipline within the UIM’s Sport program, a racing activity on the water which is very easily accessible for young people and which shows the way forward through the recent introduction of electric engines alongside traditional combustion engines.

The finalization of the 2020 Sport Calendar of the different disciplines and the adoption of the Rules and Regulations applicable in the 2020 season marked the technical and organizational scope of the work accomplished within the Committees and the UIM Council, and the international Powerboat Community now had all elements of reference at hand for looking forward to experiencing a new season of competitive and highly appealing powerboat racing.

President Chiulli also welcomed two new Members, the Maldives Powerboat Association and the Kuwait Water Sports Club, who both joined the UIM with full membership rights, and he took the opportunity to hand over the “UIM Medal of Honor for Work” to the oldest serving UIM Officer, Spanish Member Manuel Gonzalez Pando from Mallorca, who completed 60 years of loyal and devoted services within the UIM.

Following the meeting, UIM President Chiulli, who is also President of GAISF and SportAccord, said: “It was an honor to meet Mr. Gou and to exchange about our visions on the future of Sport. China is a major hub for sports organizations with number of major sports events being held in this country. We can observe an incredible passion for watersports in China, and we are happy to strengthen our cooperation with its Sport Authorities.”