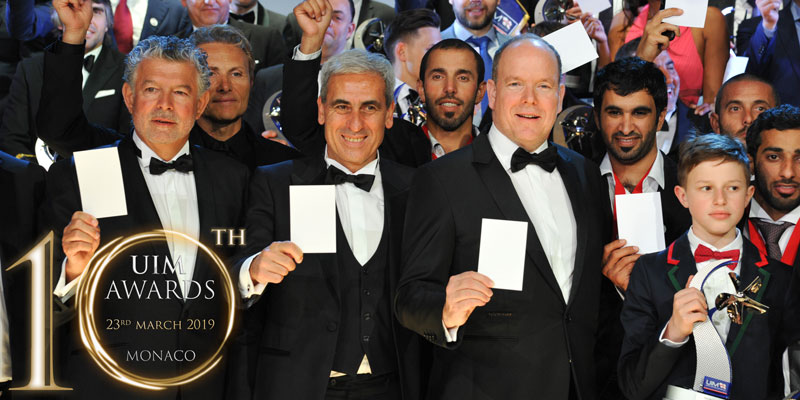 Monaco, 25th March 2019: In the presence of H.S.H. Prince Albert of Monaco, 60 World Champions and Special Awards winners from the world of powerboat racing were honoured on Saturday 23rd March at a star-studded celebration to mark the 10th edition of the Union Internationale Motonautique (UIM) Awjavascript:void(0);ards Giving Gala in Monaco.


More than 400 competitors and VIP guests from the world of sport, boating, business, NGOs and media gathered for an occasion that culminated in the crowning of Shaun Torrente of Team Abu Dhabi and Estonia’s Stefan Arand as UIM Driver and Junior Driver of the Year respectively. Co-sponsored by Tianrong Sports – the Shenzhen-based promoter of the UIM F1H2O World Championship Grand Prix of China – and H2O Racing, the all-star affair was a fitting celebration of the individuals and teams who dominated the sport of powerboat racing in 2018. 
“On behalf of the UIM, we were honoured to be joined by H.S.H. Prince Albert of Monaco for what is the most prestigious date on our annual calendar,” said UIM President Dr. Raffaele Chiulli.

“As well as recognising the achievements of our World Champions and Special Awards winners, His presence has also ensured we have enjoyed a memorable occasion to mark a decade of the UIM Awards Giving Gala and we thank Him for His ongoing invaluable support of powerboat racing.” Among the competitors to be honoured were those racing in Circuit, Pleasure Navigation, Aquabike, Offshore, MotoSurf and Formula Future. In addition to the racing trophies, there were also Awards and Special Mentions presented for those contributing to environmental sustainability in powerboat racing and yachting.

The UIM Environmental Award was presented by H.S.H. Prince Albert of Monaco and Dr. Chiulli to the Yacht Club de Monaco in recognition of the ground-breaking and educational Monaco Solar and Energy Boat Challenge, which is now an annual event in the Principality. Other Special Mentions in the category went to Jaguar Vector Racing, Silent Yachts and XShore. Aside from the Awards, the UIM also took the opportunity to update the media on its ongoing relationship with UNESCO in the development of a toolkit along the lines of the Kazan Action Plan, while plans were also unveiled for the forthcoming first round of the 2019 UIM MotoSurf World Cup to be staged in Abu Dhabi early April.


About Shenzhen Tianrong Sports Culture Management Co. Ltd.
Since 2006, Tianrong Sports has been the exclusive institution authorised by the UIM for the promotion of the UIM F1H2O World Championship in China. It has successfully held the Grand Prix of China on 20 occasions from 2006 to 2018 and provided an unprecedented platform where Chinese cities present themselves to the world through the live TV broadcast to over 100 countries and regions. In June 2018 Tianrong Sports staged the UIM F1H2O World Championship Grand Prix of London for the first time with the initiative of developing its overseas market. Together with the General Administration of Sport of China, in 2006 Tianrong Sports established the F1 China CTIC Team, which went on to win the F1H2O World Championship from 2014 to 2016 and finish as runner-up in 2018. In order to capitalise on sports-themed investment opportunities, Tianrong Sports Chairman Li Haojie and NBA Hall of Famer Yao Ming founded Yao Capital, a leading Chinese private equity firm both in China and globally. Yao Capital invests in a broad range of sports-related new-lifestyle fields as related to media marketing, sport-derived products and services, sport Internet etc.