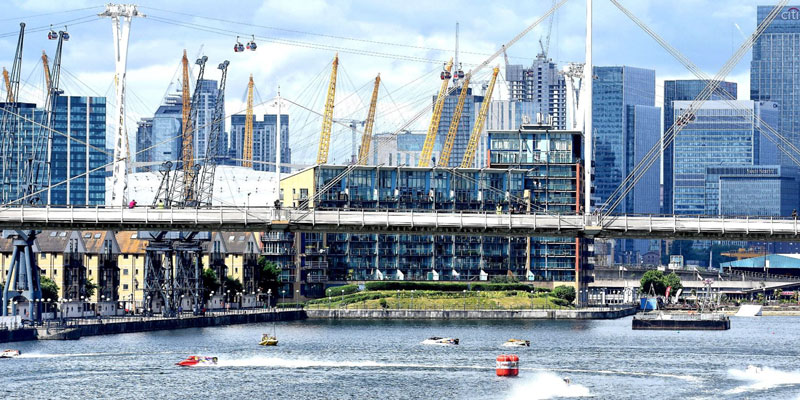 The UIM F1H2O World Championship, the flagship series of international inshore circuit powerboat racing, returned to London for the first time in 33 years for round 2 of the 2018 World Championship.
The UIM F1H2O Grand Prix of London marked the tenth time that Great Britain has hosted a round of the championship; the nine previous rounds were staged at Holme Pierrepont (1981 & 1982); Bristol (1982 & 1990); London (1983, 1984 & 1985); Cardiff (1993 & 1994).
Another strong link between London and Powerboating is represented by its sole Olympic appearance on 28 and 29 August at the 1908 London Summer Olympic Games.
The Grand Prix of London had assembled thousands of spectators along the spectacular and historic London’s Royal Victoria Dock waterfront, with several representatives of international motorsports and business community onsite who were made acquainted with the secrets of the powerboat sport by UIM and ARISF President Dr. Raffaele Chiulli and H2O Racing President Mr. Nicolo di San Germano.
Raffaele Chiulli, UIM President said “we are very pleased that H2O Racing with the Carbon Neutral London Grand Prix has taken another step forward in its responsible approach to protect the environment and is implementing, along with other key stakeholders, the UIM sustainability and corporate social responsibility approach set in the UIM Strategic Plan”.
Sweden’s Erik Stark delivered a sensational performance to take a second career win with the victory at the Grand Prix of London; Philippe Chiappe and Peter Morin made it a double celebration for the CTIC F1 China Team finishing second and third after enjoying a race long inter-team battle.
After the opening two rounds the UIM F1H2O World Championship now heads to the Grand Prix of France which will be in Evian on 29 June-1 July.