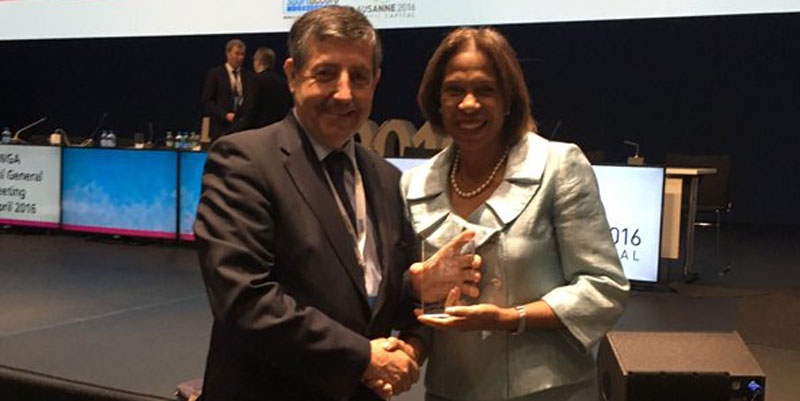 Netballer honoured with Award by the International World Games Association.

The IWGA’s President, José Perurena, today presented the International Netball Federation’s President, the Hon. Molly Rhone OJ, CD, with the IWGA Athlete of the Year Award on behalf of netballer Mwai Kumwenda from Malawi. The presentation took place at the IWGA’s AGM, held at SportAccord in Lausanne.

Mwai Kumwenda, who plays professionally for Mainland Tactix in Christchurch, New Zealand , was one of 18 international nominations for the prestigious award, from a cross-section of sports. She was crowned as the clear winner by an online poll.

Molly Rhone says: “Winning this Award is not only good news for Mwai but for her country, Malawi, and netball in general. Mwai has excelled through hard work and dedication to netball and is really deserving. She is a great role model for young girls and I congratulate her most heartily.”

Mwai was awarded Player of the Tournament at the Netball World Cup SYDNEY 2015. Her win was backed by impressive statistics – 91% shots on target. With 321 goals in eight games, she was the only player to score over 300 goals.