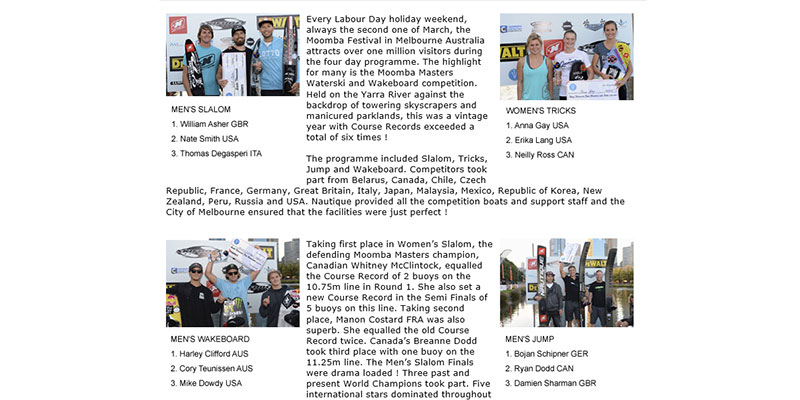 Every Labour Day holiday weekend, always the second one of March, the Moomba Festival in Melbourne Australia attracts over one million visitors during the four day programme. The highlight for many is the Moomba Masters Waterski and Wakeboard competition. Held on the Yarra River against the backdrop of towering skyscrapers and manicured parklands, this was a vintage year with Course Records exceeded a total of six times !

Taking first place in Women’s Slalom, the defending Moomba Masters champion, Canadian Whitney McClintock, equalled the Course Record of 2 buoys on the 10.75m line in Round 1. She also set a new Course Record in the Semi Finals of 5 buoys on this line. Taking second place, Manon Costard FRA was also superb. She equalled the old Course Record twice. Canada’s Breanne Dodd took third place with one buoy on the 11.25m line. The Men’s Slalom Finals were drama loaded ! Three past and present World Champions took part. Five international stars dominated throughout – Corey Vaughn USA, Freddy Winter GBR, Thomas Degasperi ITA, Will Asher GBR and Nate Smith USA. Freddy Winter topped Round 1. World Champion and World Record holder Nate Smith topped the Semi Finals. Nobody anticipated the drama of the Finals ! Winter and Degasperi set the pace with 5 buoys on the 10.75m line. Third last off the dock, Will Asher brought a roar from the huge crowd with 1 buoy on the shorter 10.25m line – just two short of the Course Record. Vaughn came next but unfortunately missed his opening gates on the 10.75m line. That left Nate Smith to take the title but in just equalling Asher’s score, a Run-Off was called by Chief Judge Jeff Smith USA. Asher was then first out. He quickly scored 4.5 buoys on the 10.75m line. Smith rose to the occasion. He gave a gold medal victory wave to the cheering Melbourne spectators as he passed Asher’s limit. At this stage, a very disappointed Will Asher was already leaving the area but he then heard the commentators announce that on video review, Nate Smith had actually missed his opening gates. The 2016 Moomba Masters Slalom title was to be his after all. What a dramatic conclusion to a fantastic event with Asher, Smith and Degasperi taking the podium places.

In Women’s Tricks, the 9,470 points Course Record was exceeded no less than four times by the three youngest competitors. In Round 1, Erika Lang USA scored 9,570 points but 16 year-old World Champion Anna Gay USA pushed that further to 9,700 points. In the Semi-Finals, Gay did even better with 9,920 points and equalled that yet again in the Finals to take the title. Fourteen year-old Neilly Ross clocked up 9,290 points in Round 1 and took the bronze medal in the Finals behind Gay and Lang. In Men’s Tricks, four athletes exceeded 10,000 points. One exceeded 11,000. Although the Course Record holder Alaiksei Zharnasek BLR did not beat his own Course Record of 11,870, his score of 11,570 was close and good enough to take the title. Having watched his 16 year-old daughter Anna take the Women’s Tricks title, Russell Gay took the silver medal with a solid score of 10,890 ahead of Franck Desboyaux with 10,780 points. This was just 40 points ahead of Australia’s U21 Tricks Champion Joshua Briant.

At 15.45hrs, Women’s Jump event began with the thousands of spectators waiting to see if their own World Champion, Jacinta Carroll, could take the Moomba title against very tough international competition. The Course Record was 53.8m. It was exceed twice on the Nautique Jump Ramp this time around. Lauren Morgan USA was the first to break the 50m distance with a great 50.1m score - enough for a bronze medal. Alex Lauretano USA responded with 51.7m to take the silver medal. To the crowd’s delight, Jacinta Carroll was in a league of her own with a distance of 54.2m to take the title, having already set a new Course Record in Round 1 of 54.3m. In Men’s Jump, all eyes were on the newly crowned World Jump Champion, Ryan Dodd CAN. Adam Sedlmajer was first on the water. His 62.2m was a great start. Rodrigo Miranda CHI raised this to 65.3m before Igor Morozov RUS pushed it further to 66.3m. The last three on the water included past Moomba champion Damien Sharman GBR, Bojan Schipner GER and Ryan Dodd CAN. Sharman immediately took the lead with 66.6m. Schipner brought a roar from the huge crowd with 70.2m – and that added almost a meter to Course Record. Now it was all down to the World Champion Ryan Dodd to respond. He had a very impressive set with 64.5m, 66.9m and 67.5m but Schipner had just taken the biggest title of his career to date. Dodd took Silver and Sharman Bronze.

Before the enormous Fireworks Display, the Waterski Overall Champions were announced and the star studded Wakeboard finals again brought the best to the top. In Waterski Overall, Adam Sedlmajer CZE and Clementine Lucine FRA took Gold, Josh Briant AUS and Whitney McClintock CAN took Silver and Luke Outram GBR and Abbi Gratwohl USA took Bronze. In Wakeboard, it was the Big Three who did the business. Mike Dowdy landed a solid Double Back-Roll, Cory Teunissen landed a 1080, but as ever it was Harley Clifford who came out on top throwing down almost a perfect run. Harley Clifford AUS took Gold, Cory Teunissen AUS Silver and Mike Dowdy USA Bronze.