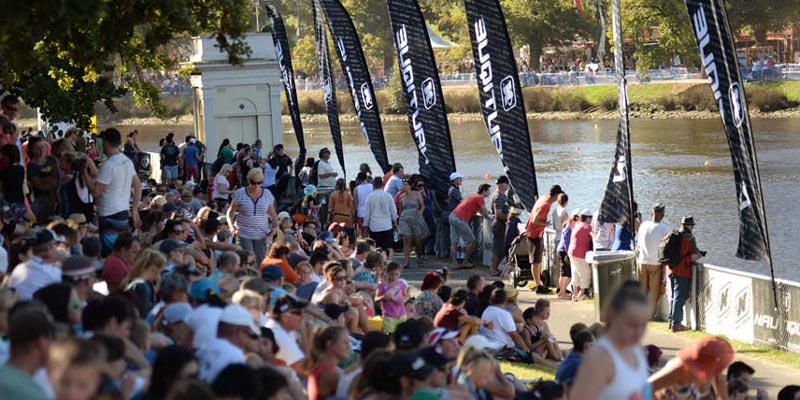 Not only is the annual Moomba Masters the first major Waterski & Wakeboard international event of the year, it is also by far the biggest spectacle. One year ago, an estimated 200,000 spectators enjoyed the Waterski and Wakeboard programme. Dating back to 1955, the entire Moomba Festival set a record of 1.7 million in attendance in 1996. By any standards, this is a very special event for all involved. With sunny 28C/82F conditions forecasted, this promises to be a vintage year for Australia’s Labour Day celebrations.

The competitors from 16 countries will include no less than six newly crowned World Champions. Clearly, each will be under enormous pressure to prove themselves on the Yarra River in the shadow of the Rod Laver Arena in downtown Melbourne. The river itself is an enormous challenge for the athletes with varying currents, tidal impact and occasional debris. With its 242km length it is surprisingly clean for a city waterway and is reputed to now have 15 species of native fish - a great credit to the City of Melbourne.

Nate Smith (USA), World Waterski Slalom champion and World Record holder, is also the defending Moomba Masters champion. He is more than likely to score again on the very short 10.25m line as he did here last year, making him the hot favourite. In Men’s Jump, drama is guaranteed. Canadian Ryan Dodd’s dream came true in Chapala, Mexico, last November when he was crowned World Champion for the first time. However, the defending Moomba champion, Freddy Krueger, with seven World Records already in the bag, will push Dodd to the absolute limit. Women’s Jump will also get the 200,000 spectators on their feet as Jacinta Carroll (AUS), two time World Jump champion, will also be defending her Moomba Masters title. She may well exceed a distance of 55m if her recent arm injury is not a factor. In Tricks, everybody will want to see for themselves the talent of young Anna Gay (USA). At just 15 years old, she stunned all last November by taking the World Champion Tricks title with a personal best score of 10,010 points. Her 14-year-old friend and World Championships silver medallist Neilly Ross (CAN) will join defending Moomba champion Natallia Berdnikava (BLR) in this Tricks battle. One to watch closely also is Adam Sedlmajer (CZE). Crowned World Overall champion last November, he will take on Felipe Miranda (CHI) and Joel Wing (AUS) in his attempt to add the title of Moomba Masters 2016 Overall champion to his collection.

In Wakeboard, with recently crowned World Champion Massi Piffaretti (ITA) not attending, there will be a thrilling duel between the superstars Harley Clifford (AUS), Phil Soven (USA) and World Cup Mandurah champion Cory Teunissen (AUS). All are at the peak of their skills right now. However, Shota Tezuka (JPN) and Tony Iacconi (AUS) could create surprises. In Women’s Wakeboard, World Champion Meagan Ethell (USA), as with all the other recently crowned World Champions, will have high hopes of adding Moomba Masters 2016 titles to her achievements.