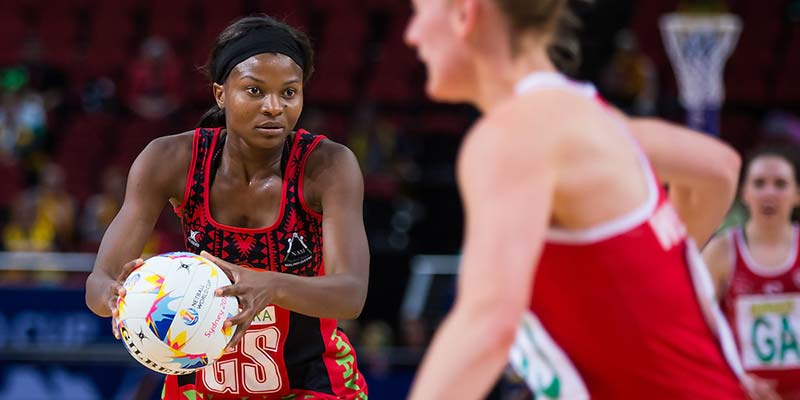 Malawi netballer Mwai Kumwenda has been crowned Athlete of the Year by the International World Games Association (IWGA).

Kumwenda was one of 18 international athletes nominated for the IWGA award, from a cross-section of sports. She was crowned as the clear winner by an online poll.

Kumwenda, who plays professionally for Mainland Tactix in New Zealand, was awarded Player of the Tournament at the Netball World Cup SYDNEY 2015. Her win was backed by impressive statistics – 91% shots on target. With 321 goals in eight games, she was the only player to score over 300 goals.

The 26 year-old shooter was delighted with the win: “I feel so excited and honoured that so many people around the world have voted for me – I really appreciate it.”

Kumwenda first played netball aged 15, in her village in Malawi. Now an international netball star, this award recognises the progress she has made: “This is important for me because netball has been my life from a very young age. I would never have thought, in a million years, that I would win this award.

“This has been a journey – a journey of small steps, with each step dreaming of the next. It has been a journey of great support from all around me – family, friends, coaches, team-mates and most of all my fans around the world. This is also important because, to all those young girls and boys just starting out with the same dream, I would say ‘don't give up, get the right people around you and keep working hard’.”

Mwai was nominated for the Award by the International Netball Federation. Clare Briegal, CEO, said: “This is great recognition for a superb role model in netball. As well as being a world class athlete, Mwai embodies women’s empowerment, and is a fantastic inspiration to so many people all around the world.”

The IWGA is an organisation recognised by the International Olympic Committee. Its principal aim is to develop the popularity of the sports governed by its 37 Member Federations, which includes the International Netball Federation, to improve their prominence through excellent sporting achievements, and to conserve all the traditional values of sport through The World Games, which take place every four years. The 10th World Games will be held in Wroclaw, Poland, from 20-30 July, 2017.