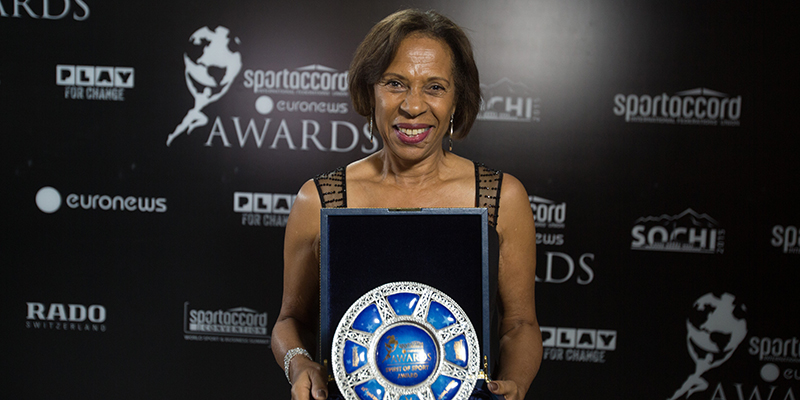 The International Netball Federation (INF) had the honour of receiving the Spirit of SportAccord Award at the SportAccord Euronews Awards last night in Sochi, Russia.

This prestigious award recognised the important work the INF is carrying out in international safeguarding in sport in conjunction with UNICEF, helping to change the lives of children throughout the world.

The INF faced major competition from the international federations of football (FIFA), athletics (IAAF) and table tennis (ITTF) for the award, which was presented by Sheikh Ahmed Al-Sabah, President of the Association of National Olympic Committees, to INF President the Hon. Molly Rhone, OJ, CD, on behalf of the INF.

A delighted Molly Rhone thanked SportAccord for recognising the INF and its global endeavour. Addressing the audience, she said: “We are proud to have worked with UNICEF in creating international safeguards for children in sport. I hope you will help us to promote these within your federations, countries and organisations for the sake of the children in our care.”

Netball was also represented in the SportAccord Sports Woman of the Year Award, with England’s Geva Mentor making it to the final four, won by Canadian bobsleigh’s Kaillie Humphries. The SportAccord Euronews Awards were instituted to honour sporting excellence from within SportAccord’s member federations and invited nominations from the members, before opening the voting to the public.

The awards ceremony marked the end of the 2016926896865 SportAccord Convention World Sport and Business Summit in Sochi that saw the participation of over 3000 people from the world of sport.